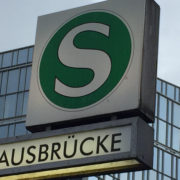 If there is one mistake I made when I moved to Hamburg, it was to come by car. Not to mention it was an Irish car with the steering wheel on the right side that I could not reasonably insure in Germany. But that’s beyond the point, in the end I had a car I could not park anywhere safe/legal/warm and I never EVER needed it. Because Hamburg has fantastic public transports and other means of transportation.

The S-Bahn and the U-Bahn

The basics – it’s the underground (or metro, or subway – you get the gist). The difference between both is not completely clear to me. I’ve been told the U lines are underground and within the city while the S lines drive in the open air and into the suburbs of Hamburg. Anyway, it does not matter much to you since the tickets are valid for both. In general, the metro is very reliable. I think I experienced two strikes and four delays in the last six years. It drives late into the night (around 1 AM) and continuously from Friday morning to Sunday night. In other words, you can party all night during the weekend. For a detailed view of the various lines, visit the HVV website. There are gazillions of bus lines. On the one hand, I find them very confusing, so I try to avoid them as much as I can. On top of that, there are some unexpected detours due to roadworks every now and then. Plan your journey carefully or you might end up in the unknown! On the other hand, some area are best reached by bus if you don’t want to hop from metro to metro for hours.

The convenient Car2go and Drivenow

A life saver for the three times in the year when you desperately need a car. Many cities have such a service now. You only need to register once for a small fee, then you can borrow cars as you need them and pay by the minute. That way, you almost always have a car not too far away whenever you need it but no hassle such as insurance, tanking, parking fees, or repairs. The two main providers in Hamburg are Car2go (white and blue Smarts) and Drivenow (black Minis.) I love city bikes! Whenever the weather allows it, Hamburg is a great city to experience by bike. You will need to create an account and buy a minimum of €5.00 top-up credit to start. Then you can pick a bike from the bike station and a cycle about until you give your bike back to any bike station located in the city. The first 30 minutes are free of charge and this resets every time you rent a bike again. You can even rent two at a time! This is definitely something I recommend using a lot. Rookies in Germany: bike lanes are sometimes on the road and sometimes on the pavement! If the pavement has two colours, then you might be standing on a bike lane. Be careful with these, some bikers are ruthless. There are three main stations for regional trains in Hamburg: Hauptbahnhof (Central Station), Altona and Harburg. As for flights, Hamburg has one airport (S1 Hamburg Airport) – some low-cost airlines use the airport in Lübeck nearby-ish (70km away) as the „Hamburg airport“ – be warned!