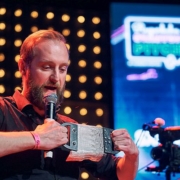 Large ships are heavy, really, really heavy. Weight is always a critical factor in shipbuilding and the ideal combination of lightweight plastics and indispensable steel is the solution. The Hamburg startup Hyconnect offers a method of combining both materials. With this groundbreaking invention Hyconnect won the Reeperbahn Startup Pitch on November 7th.

Dr. Lars Molter worked for ten years at the Center of Maritime Technologies (CMT), focusing on the question how to build ships with less weight. The starting material is still steel and the possibilities for making it even thinner and lighter have now been fully exploited. Synthetic material has been used for a long time in the construction of smaller boats and also sailing yachts. This is now possible for large container or cruise ships as well. However, it is not possible to do this without steel entirely. On one hand, this is a question of cost and on the other one, it involves safety regulations, which are basically still a consequence of the Titanic’s sinking.

Weaving instead of gluing: This is the FAUSST method

The challenge is to find the smartest possible way of combining steel and fibre-reinforced plastic components. Gluing would be one possibility, but it is more complicated and time-consuming than it might sound. This is mainly the case in shipbuilding, where there is no standardized mass production as in the automobile industry. The concept of weaving the two materials together was developed in 2013. The glass fibers are available for this purpose, which, as the name suggests, have features that make such an attempt possible. Metals can also be made into threads so thin, that they can be interwoven with the glass fibers.

The method, which makes this possible, is called FAUSST. In German, this acronym stands for fiber composite and steel standard connection. After two years of research work, it was developed to such an extent, that the first tests of welding could be carried out. Lars compares the way FAUSST works with that of a screw anchor, which basically is a connection between screw and wall. In our case, this “plug” is a component with glass fibres embedded in plastic at one end. At the other one metal fibers are welded to a steel plate. This creates an intermediate piece, that is adapted to the requirements in size and shape. It can be easily connected to the components made of the materials in each case.

From a project to a startup

FAUSST has received a lot of positive feedback from the industry and was funded by the Federal Ministry of Economics and Technology in 2016. Nevertheless, the project ended in 2018 and Lars founded the startup Hyconnect that summer to promote the commercial use of FAUSST. In the same year Hyconnect received support by the InnoRampUp program of Hamburg’s IFB and had a successful appearance at the SLUSH in Helsinki. The current core team of the startup includes the founder, Ulrike Brase, responsible for marketing, and Felix Michaelis. The project engineer studied mechanical engineering and was for 13 years in the navy. He therefore knows a lot about ships.

An important success factor for Hyconnect is its large network. This includes connections in the shipbuilding industry and to material manufacturers, but also to other industries. One example is the agency deepblue, where Hyconnect currently has its office. This agency and some other partners are counting on the FAUSST method to become widely accepted. The patent procedure for this has not yet been completed, but this should be a mere formality. In any case, the potential is huge, especially in view of the omnipresent question of how to reduce CO2 emissions.

SXSW might help Hyconnect to take the next step

Lighter vehicles that consume less energy are one possible answer. This does not, of course, only apply to ships, but also to the car industry, which has already been mentioned. The second step after that would be to enter aircraft construction, where the regulations and requirements are even more complex. In order to allow Hyconnect to grow appropriately, the startup naturally needs money. The idea of finding supporters through an ICO, i.e. the issue of a crypto currency, is not being further pursued by the startup at the moment. Classic investors are needed instead. Maybe Hyconnect will be able to find them when Lars is part of our delegation at SXSW im Austin, Texas.

Since 2014, Hamburg Startups has been making sure that startups can show that they have it at the SXSW in Austin, Texas. From 13th to 22nd March 2020, Austin will once again become the hub of the creative and digital world. Traditionally, the German delegation is one of the strongest. Thanks to the support of our partners from Hamburg Invest, Baden-Württemberg International, the Sutor Bank, Vast Forward. german.innovation und Klitschko Ventures, a total of four startups will have a place in our shared flats, the festival ticket and access to exclusive events. We will report about the festival exclusively and focus on the successes and experiences of the German participants.

New to Austin is german.innovation, an open collaborative network founded with the aim of strengthening and connecting innovative creatives, founders, companies and scientists. The presence is made possible by the commitment and financial support of the cities of Hamburg and Munich, the federal states of Baden-Württemberg, Bavaria, Hesse and Rhineland-Palatinate and numerous partners in business and science.

How to Austin – the best insider tricks for your trip to the SXSW Fes...

CUCA BY LINDA: “I want to make the lives of every woman more beautiful...
Scroll to top