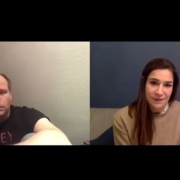 Like so many others, the Sparkassen Innovation Hub wanted to make the journey to the SXSW in Austin, Texas. The coronavirus, as is well known, put a big dent in this plan. Now more than ever, the team said to itself. It took part in the #WirVsVirus Hackathon of the German government and developed it into a campaign for local retailers under the hashtag #gemeinsandadurch. In a new episode of the video conference #CouchbyCouchwest, Martin Schaffranski from the Sparkassen Innovation Hub explains exactly what this is all about.

Together through the crisis. The Sparkassen Innovation Hub, central contact point for FinTechs within the Sparkassen-Finanzgruppe, has launched an online voucher portal for local retailers. Affected companies such as cafés, hairdressers, craft businesses or booksellers can register at helfen.gemeinsamdadurch.de, create their company profiles and offer vouchers worth between 10 and 100 euros for sale. Companies receive the corresponding proceeds immediately. Buyers of the vouchers thus make a quick and effective contribution to protecting their local businesses from the neighbourhood.

The idea was born between March 20th and 22nd at the #WirVsVirus Hackathon of the German Government. It is being implemented by the Sparkassen Innovation Hub together with the voucher service provider Atento. The portal will be continuously developed and supplemented in the coming weeks with additional services and assistance for retailers. More than 200 savings banks currently support the initiative. Within a few days, more than 1,500 retailers have registered and sold more than 1,000 vouchers.

In our #CouchbyCouchwest interview with Martin Schaffranski, Head of the Sparkassen Innovation Hub, you can find out even more about the Campaign. You also learn what makes the Sparkasse system relevant and why events like SXSW are important to him.