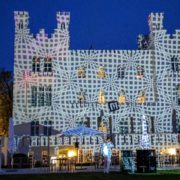 A guest post by Kixka Nebraska: In the world of ubiquitous tech conferences, the MLOVE Forum has the reputation of being the Pirelli calendar among the networking events: insightful speakers, cutting-edge themes for high-level target groups at exclusive venues, supplemented by in-depth workshops – and this in a casual-friendly atmosphere.

Harald Neidhardt and his team have been able to fulfill this promise for seven years. 2017 for the second time in the Grand Hotel Heiligendamm. “We are all Futurists.“ could be read as motto over the three high-tech days in the oldest German seaside resort hotel, in glamorous 200-year-old rooms.

It is no coincidence that MLOVE is so successful in writing the future. The Invite-Only conference is not a closed shop. Interested participants must send a valid motivation letter before they receive an invitation. In this way, a high-quality mix is assured. As a rule, all participants present their own exciting topics and have a podium and lecture experience, which makes the exchange on the same level very relaxed. At the same time, the manageable size of the event guarantees sufficient space to engage in conversation.

During the keynote, a device displayed the spoken words on the side walls thanks to IBM Watson. Photo: Kixka Nebraska

Boards, balloon tentacles and illuminations for a special atmosphere

The second success factor is the creative elements, such as the visual design of the conference, which artistically enhances the spirit of the place. The LED badges of the Hamburger participants by Thinventions probably allowed more interaction than could be hoped for this year. The geeky gadget, however, does not only contain boards and flashing lights, but also the participants’ handwirtten names and institutions. At these (apparent) little things it is very clear how much creativity and heart flows into the whole event.

The black, white and silver balloon tentacles of Sina Greinert hanging at the largest tree in the garden give an eerie feeling to the environment. The journey into the future resembles that of Alice in Wonderland. The horizons are also broadened thanks to pianist and music hacker
Seda Röder and Sven Meyers KYMAT‘s Drop Sound Enlightenment. Success factor: Try it yourself!

From Virtual Reality to Augmented Reality to Mixed Reality – eyeglasses and hologram-lenses, drones and eScooter invited the guests to leave their own comfort zone. Among other things, the Hamburg startups present were keeeb, PuttView, Noys VR and mesaic. The Chatham House Rule, which applies to the whole event, just as much as the request to use Social Media Sharings only very carefully, ensured enough playful freedom. Several participants had bursts of happiness while interacting with Pepper, the emotionally intelligent and super-cute white robot.

In the MLOVE workshops, I chose the very recommendable Friederike Korte, futurist and coach, who has a design-thinking approach. In the squeezed, but very intense session, the personal MLOVE highlights were transformed into everyday projects for individual projects in a four-stage process in individual and group sessions.

The Talks, the heart of the MLOVE, are opened by Monika Bielskytes‘s keynote. As creative director and strategist of the interface between tech and culture, “Prototyping the Future” is her job. Thus, she designs science fiction far beyond what is traditionally understood.

„Ideas have impact. How we speak matters. How we see matters. In fact, it all starts with how we see the world.“

The extremely visual-working designer convinced with a keynote without slides, which focused solely on her spoken word.

In the style of an “Honest Presentation” Gen Sadakame, co-founder of EyeEm, performed a subtle entertainment.  He brought in solid facts about the extent of the already existing EyeEm technology, from image recognition to image search to aesthetic image evaluation.

Virtual Reality for all

The Arts+ were presented by Holger Volland, Vice-President of Frankfurt Book Fair. In workshops from 11th to 15th October in Frankfurt, digitalization in the creative economy will be a key issue. Nothing less than the democratization of VR Discovery has been made by Leen Seegers LucidWeb . At least as exciting for all women in the VR, AR & MR industry: the “Women in XR EU” network.

A very special experience was shared by Sacha Tueni, who brought Facebook Spaces live on stage and for the VR-Selfie successfully shot by the avatars, it got extra applause. The MLOVE Forum is more than the sum of those parts, because it goes far beyond what the list of futuristic talks or digital strategies with regard to exponential disruption could convey: the cordiality of Harald Neidhardt and his team and the professional implementation enable the fluid, informal get-together, the ideas, inspiration and innovations of these three days.
If you do not want to miss out on the MLOVE 2018, you should book the 05th-07th July 2018 in your the calendar and check it here to stay tuned.

Kixka Nebraska, profile agent and cofounder of the Digital Media Women, started in 2007 as a digital flaneur. She has been professionalizing both on both analogue and digital levels, and since 2010 she has been advising on the digital scene in creative industries such as management, freelancers, journalism schools, foundations, agencies and companies. She has been a frequent speaker at re: publica, one of the largest digital conferences in Europe. Check her profile here: 48 hours to make of Hamburg a great digital experience for tourists.

The Food Innovation Camp exceeds all expectations
Scroll to top