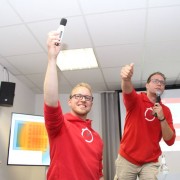 Last night, I went to a startup slam organised by 12min.me. The concept of such an event? Six start-ups compete against each other. Each of them are entitled to six minutes to pitch their ideas and 6 minutes to answer the questions of the jurors. At the end of each performance, the success of the pitch is measured with a applause meter. And, as you must have guessed by now, the entrepreneur who collected the most applause wins the contest.

Who did we meet last night at 12min.me?

The first contestant (Erdal) presented chef.one. The end of eating alone in the evening. Thanks to this app, you can organise your own version of Come dine with me. You hire a chef and pick random guests to eat together at your place. Apparently a fantastic social dining experience, especially if you’re new in town and don’t know many people. A pretty convincing idea for which the guests pay €25.00 (table of 12 guests) for a three-course meal. Chef.one takes a 20% transaction fee. Next we had two eccentric Northern Frisians who told us about WindCloud. They had smoke effects, fancy leopard trousers, a story about Frisian sheep and… What are they about again? A right, green servers, supported by electricity generated by turbines from the area (plenty of wind in North Frisia). Not only it’s environmental-friendly, it’s also cheaper and faster than classic datacentres.

Third contestant: the only female – Marie-Lene –  of the party. She was there to praise Sofa Concerts and, although she came across as nervous, she gave a very clear speech. The core idea is to bring musicians to your home, your wedding, your company anniversary, or anywhere else. No need to pay for exorbitant agency fees, it all happens online. And so, musicians and patrons are brought together. Surprisingly enough, Sofa Concerts are already connected worldwide in most countries. Good job!

And then, there was a break (with beers)

Because the startup scene and Germany are always connected to beer one way or another. The next entrepreneur was a xoogler who presented Look and Listen. He was the most unfortunate speaker for his idea was not quite tangible. To be perfectly honest, I haven’t really understood what he meant, although it did sound very exciting and about augmented reality. Something about bringing texts, pictures and videos together without a screen.

As a fifth candidate we had Lasse and Help2rent. He had the loveliest story with an owl and a piglet. A very touching story to show us the benefits of his service. He offers to take care of all the downsides you might face when renting out your flat on airbnb. This means, selecting the guests, cleaning after their departure, taking care of the keys, and so on so forth.

Last but not least, we met Florian and Fedor, founders of Attenio. Not the easiest business model to relate to, but still interesting. Their focus dwells on augmented reality and new technologies for factories and assembling work. A very B2B idea (investors love that) that usually does not get a lot of applause from the audience, more receptive to B2C or C2C concepts.

And then there were none left. The ranking of this 12.min startup slam was rather unexpected. The jurors had a stronger incline toward chef.one, attenio and Sofa Concert. But the audience is the only one to decide! And after a lot of consideration, blaring horns, and rivers of beers…

Winner: Help2rent (who might have invited a few friends to cheer for him ;))

Thank you 12min.me for organising the evening!