An event full of startups is like taking a glimpse into the future. The Food Innovation Camp was no exception to the rule. Many speeches and discussions focused on answering the question of our eating habits in 2030 or 2050. We summed up the most exciting trends and prognostics here.

The food sector has significantly changed in its diversity in the past 15 years, according to Fabio Ziemßen. Fabio works at the METRO Group as „Head of Food Innovation and FoodTech“ and runs the e-Food blog.  As such, he has a pretty accurate idea of what is going on on the scene and what is likely to be happening.

Food has become a religion

Food has become the religion of our times. Certain products are considered to be „super food“ while other, such as salt or sugar, are demonized to the extreme. There are excesses in both statements, yet conscious eating has most definitely become a common topic, along the fact that some facts cannot go on, for example in the agriculture. The Food Assembly network offers an alternative to it. They bring producers and consumers together. Transparent and regional are key values. However, regional does not mean provincial. The Food Assembly started in France under the name „La Ruche Qui Dit Oui !“ and is now active in nine European countries.

Food is the new Internet

A change of attitude regarding food does not necessarily mean a fall back into the pre-industrial times. „Food is the new Internet“, Fabio quotes Tesla CEO Elon Musk’s brother, Kimbal. This is an obvious growth opportunity for the industry, but also for technological possibilities. The speech is about the Interest of food and Blockchain may very well play a part too.

On a much more concrete note, let’s mention meat produced in vitro. It could be the solution to a production that is bad for the environment and that detains a certain cruelty. Urban Farming is also a future-oriented alternative to pesticides. What about insects as a source of nutrition? There are no more surprising than food generated via 3D printers as Foodini, developed by the Spanish startup Natural Machines.

The list of innovations and companies that approach the topic could go on forever. Let’s focus on the ones that attended the event. They came to the Food Innovation Camp with the motto „Food 2050“. A central topic is fighting against wasted food. up to 30% of our food is trashed, even though most of it could have been safely consumed. The main reason behind it: the expiration date. Most consumers simply misinterpret it.

It would make a lot more sense to have some sort of „freshness index“ that would determine the current quality of the food. And that is exactly what tenso from Stuttgart is working on. A continuous monitoring of the temperature and the quality of the good from the moment it is produced to when it lands in your fridge would accurately define whether some food is still good or not. Yet this would not be the answer to all wasted food. There are for instance enormous wastes from the catering industry, an industry that throws away a lot of food that could still have been eaten. This is where the Finnish startup ResQ saw potential. They offer to sell the rests of restaurants and hotels that could not be sold. A great offer that does not stand as a direct competitor to supermarkets since the offer varies greatly from day to day.

Fighting against waste will doubtlessly bring up more and new business models in the future. As of today already, Just Spices acts as a pioneer in this trend. They take a common and established product, in this case, spices, jazz up the quality of the ingredients (organic, without additives) add a wee innovation to it (Just Spices puts fruit in their spice mixes), and make a compelling story out of it.

Will our food come from space?

This is the current situation for many food startups. However, Lars Schanz from the German Aerospace Center (DLR) has a much more futuristic vision. He is involved in teh development energy saving methods to produce food in the outer space. A thrilling story in tiself, but there’s another hook. Urine is a key ingredient. Generally speaking, Lars thinks Europe is on par with the US if it was not for risk taking.

moving from the lab to a practical case is more difficult, due among other things to the complexity of genetic engineering. How will our food look like in 2050? Neither Lars, nor the other speakers wish to voice an opinion. To early, too unpredictable. The one thing they all agree on, is that food should used with parsimony, without supressing pleasure. Max Thinius’s speeech at the Food Innovation Camp also dreamed up the future of food. After all, max is a food fortune teller. he is also the spokesperson for AllyouneedFresh, that essentially focuses on the online trade of food. AllyouneedFresh is an online supermarket and as a subsidiary of the German Post, they are very strong as far as logistics is concerned.

And it is precisely in the food sector that special challenges are found. Food is sensitive and must be carefully packed. However, this should not lead to too much garbage, which is why multi-path systems are becoming more and more popular. Often the devil is also in the details: Tetrapacks keep a lot of pressure from above, but not from the side, pears cannot be handled like bananas. Such and many other things must be taken into account when compiling packages.

Ordering food should be simnple

The website of an online grocery shop looks different than usual webshops. The customers do not look for shopping experiences here and do not want to browse for a long time, they just want to fill their shopping carts quickly and without a hitch. The next step of simplifying AllyouneedFresh was the introduction of a chatbot, which accepts shopping lists via WhatsApp and converts them into purchase offers.

As a next step, the order should be possible by language input. Perhaps the trash can can help by recognizing the barcodes of the discarded packaging and reordered accordingly. Either way, Max is convinced that the online food trade, which is currently still a niche, will soon become a common place. Amazon Fresh will agree with him.

The problem with all predictions is that they tend to remain largely unknown. As far as the Food Innovation Camp is concerned, however, we are confident that the premiere of July 17th 2017 is the first one of a long series. We will keep you up to date! 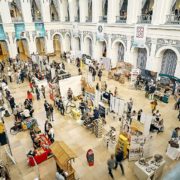