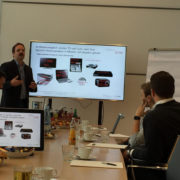 Start-ups have all one thing in common: money is tight. And when it comes to spending some money on marketing, I often hear “nothing, let’s just get traffic from Google.” How naive. But that kind of thinking usually puts TV advertising out of reach for most startups: of all the media, it is the most expensive one.

A common misconception among entrepreneurs and business founders is to think of TV as a dying channel. Gross mistake. According to the media agency JOM, TV is still one of the leading media supports in Germany. The industry weighs 10 billion euros with an average of 100 TV ads watched every day per capita. Just imagine: of the nine hours spent daily on media (Internet, radio, newspapers, etc.) we spend 208 minutes in front of our TVs. As such, advertising is and remains a fierce competition with new ways to grasp the spectators’ attention. New formats appear, with banners and sponsored texts, not unlike the ones we know from browsing the Internet. With addressable TV advertising, your flipping from a channel to another is monitored and analysed to display the most relevant ads on your screen. More daring and more creative, product placement is embed within a show, presented and tested by the presenters in lieu of the classic TV spot we are used to seeing. What about startups then?

Startups still manage to jump in – not all of them, but still an increasing amount. The money spent on TV advertising by startups went up 19% from 2013 to 2014 and a whopping 46% from 2014 to 2015! The reason for startups to invest so much money? The reach and the ROI. No matter how great your SEM manager is, you can only reach so many people via Google or Facebook. Many potential customers will be left out, and these specific customers can be caught with a TV ad. The second reason is the high ROI it generates. Granted, a TV spot is expensive to produce and broadcast, however, if you can afford it and do it well, it can have a stunning impact on your business. On an average, JOM asserts reaching 400% of ROI with TV advertising. The sectors that make it to the small screen are primarily e-business, followed by service providers and the tourism and travel sector.

Nüwiel is more than just vegetables in a trailer

What is hellomonday – startup review
Scroll to top